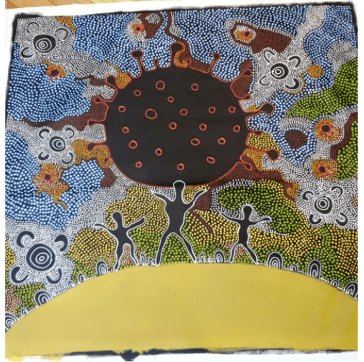 Boxing had been a passion for most of Shaun Thomas’ life, but during COVID when the gyms closed, he turned to the canvas to make sense of what was going on in the world, and express his experience of the pandemic from an Aboriginal perspective.

Shaun is a Palawa man (Palawa are Tasmanian Aboriginal people) who works as part of cohealth’s Balit Gulinya (which translates to Strong People) team, which provides support and social connection for Aboriginal and Torres Strait Islander people in Melbourne’s west. Balit Gulinya is funded by the Victorian Government and has been running for five years with weekly gatherings at cohealth’s Laverton site.

Shaun grew up on Cape Barren Island, off the coast of Tasmania, where even to this day there are no bitumen roads and no police.

“I don’t get back often, as I’m afraid of flying, but my aunties and uncles are always asking when I’ll visit,” says Shaun, whose family continue their important role as traditional owners.

Although Shaun is separated from his family by distance, he retains connections with his culture through traditional practices such as possum skin burning and painting.

During the pandemic, in an extraordinary show of focus and motivation, Shaun used his forced downtime to start his own art and clothing label – Truwana Art. Truwana is the word for Cape Barren Island, one of the Bass Strait Islands.

“COVID impacted our people a lot. It was very hard not being able to go and see family, go to funerals, celebrations, stay connected.”

“For me, I spent the first six months of 2020 sleeping on the couch, drinking too much and not doing any exercise. But then I made a conscious decision to lift myself out of that and focus on art, as well as get myself fit. I started training again from home and got myself fit to compete in the Oceania Boxing title in July 2021,” said Shaun.

Shaun’s art practice became important in February this year when Shaun and his two children, aged 5 and 7, got COVID.

Shaun said, “I had two really rough days with bad respiratory problems. And after that it was just about the quarantine.”

While in isolation Shaun produced a painting documenting his experience of having COVID, which depicts him and his sons confronting the virus.

“The painting is about strength, not defeat. If you look at it, we’re holding the virus up. It’s about the power of us as a culture,” he said.

“As I was painting I decided to paint my sons into it, on either side of me. Because it’s about me protecting them.”

Shaun is proud of his art, and his profile is growing. Last year he designed football boots for several players from the Western Bulldogs and Richmond AFLW teams. And in 2022 he designed boots for Tarryn Thomas from the North Melbourne Football Club.

Shaun says that Aboriginal and Torres Strait Islander people have long used art to document significant stories in our country, and the pandemic has been no different.

“Art is a part of our culture, and part of us telling our stories. It’s what we’re good at and known for. Whether it’s a good story or a bad story, we’re storytellers.”