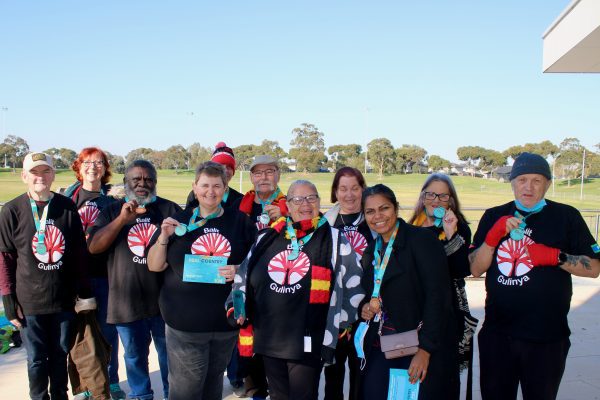 Aboriginal and Torres Strait Islander people from the Balit Gulinya group who live in Melbourne’s west participated in a Heal Country walk on the land of the Wurundjeri Woi Wurrung and Bunurong peoples of the Kulin Nation (Braybrook) to mark NAIDOC Week.

cohealth’s Balit Gulinya (which translates to Strong People) group is funded by the Victorian Government and has been running for five years. The group meets weekly at cohealth’s Laverton site.

Balit Gulinya creates a culturally safe space for Aboriginal and Torres Strait Islander people to meet each week for yarning, cooking and story sharing, and enables cohealth staff to engage with the participants to improve their health and wellbeing.

“Some of the people in the group have only recently connected with their Aboriginal identity, and Balit Gulinya has been a way for them to learn about where they’re from, their country, culture and other mobs,” said Rhonda DiBlasi, a proud Warumungu and Wathaurong woman, and cohealth’s Aboriginal and Torres Strait Islander Health Program Facilitator.

“We’ve connected some younger people into Balit Gulinya who identify as Aboriginal, but needed to find a way to connect to their history, and to learn from elders,” said Ms DiBlasi.

The Balit Gilunya members come from all over Melbourne’s west including Hobson’s Bay, Wyndham, Melton, Brimbank and Maribyrnong, and meet weekly at cohealth’s Laverton hub.

“As well as the connections within the group, the members of Balit Gulinya visit Kirrip House in Melton regularly to create connections with other mob,” said Ms DiBlasi. “This helps break down the barriers between Indigenous people from different nations,” she said.

“The group has also played an important role in bringing people into health spaces, so they start to feel comfortable and familiar with our services.”

“It means when they have health problems, we’ve done the work in building their trust and they feel safe talking with us so we can help them.”

The Heal Country walk during NAIDOC Week was a deeply meaningful demonstration, attended by Balit Gulinya members, cohealth staff and their family.

“Walking together, being part of nature, is a very special way for Aboriginal and Torres Strait Islander people to connect to country, and to culture. This is a really wonderful way for us to celebrate NAIDOC Week,” said Ms DiBlasi.