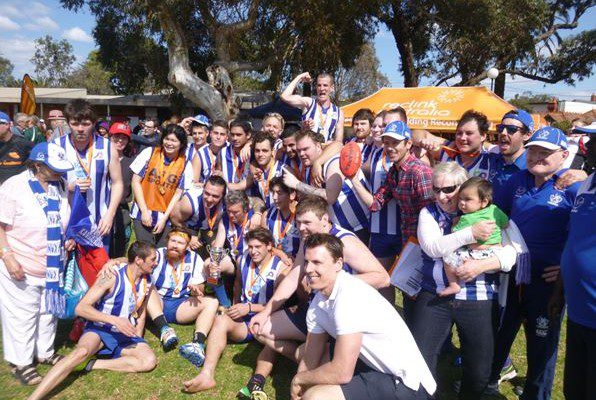 After a stellar home and away record on Wednesday 7 September the Big Dance was finally here for the Kangaroos and it couldn’t have come at a better time with cohealth in red hot form. Our team was both excited and nervous to be playing their arch rivals the Collingwood Knights to officially kick off the Reclink Football League Grand Final Series. A beautiful bluebird day down at the Peanut Farm oval in St Kilda was the perfect setting for this blockbuster match-up and the opening ceremony had both teams raring to go.

As expected the first half was super close and a battle of the midfields with both teams looking dangerous when going forward. Again the Kangaroo’s midfield of Dom, Kelsey, Johnny and Brad were getting plenty of the ball and using it with precision to help drive the ball forward. cohealth obviously got the memo about the third quarter being the premiership quarter as they blew the Knights out of the water kicking 7 goals to 1. The power forward structure of Luke, Bas, Dingus and Cam were loving life as they wreaked havoc upon their defenders to kick goals at will. Once the Kangaroo’s kicked the first goal in the final term it was all-over-red-rover and the premiership cup was coming back on the Kangabus to cohealth.

All year the team has worked together to build an inclusive and winning culture in hopes of securing a premiership and this result just backs up all the hard work the team has put in throughout the year. Stevie, Sam, Chris, Jack, Viet and Glen all played vital roles and contributed in an overall great team effort. GREAT WIN KANGA’S!!!

Congratulations to both teams for making it to the finals series and playing your heart out for the love of footy. Thanks to cohealth Sports and Recreation Worker, James Rose for this fantastic match report.