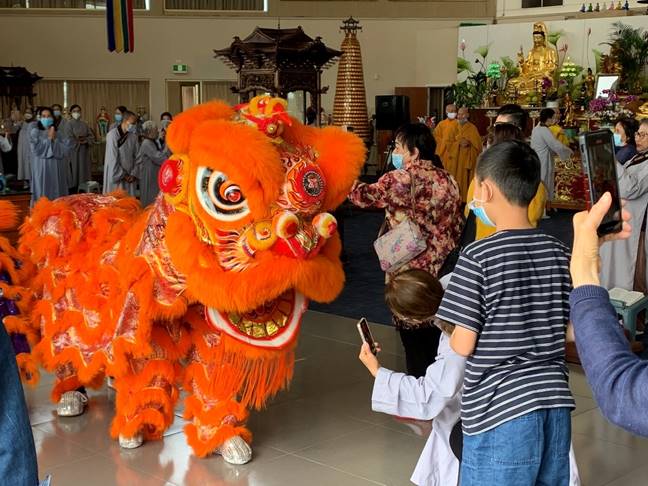 cohealth’s vaccination team popped up at the Quang Minh Buddhist temple in Braybrook on Sunday 20 February, joining a day of celebrations to welcome the community back to the temple after two long years of COVID interruptions.

Among the cohealth vaccination team onsite at the temple were several Vietnamese speaking health workers who helped engage with attendees, answer questions in language and create a culturally safe service environment. cohealth’s mobile vaccination team had also been attending the temple in the week prior to the celebration to offer vaccinations.

cohealth Health Guide, Tue, was part of the vaccination effort. Tue speaks Vietnamese and lives locally, and was a valuable asset to the team.

“As a young Vietnamese immigrant, Quang Minh Temple is home away from home,” said Tue.

“My family and I attended the temple every Sunday morning and got lost in conversation with its warm community until the late afternoons.”

“It was an absolute honour to partake in the pop-up vaccination clinic on Sunday. I felt as though I was finally able to positively contribute to my community by offering easy access to the vaccinations,” said Tue.

Alongside the temple vaccination clinic was lion dancing, martial arts demonstrations and a Buddhist service led by the Abbot of Quang Minh Temple, Senior Venerable Thich Phuoc Tan, OAM as well as giveaways by the Western Bulldogs Community Foundation.

“As restrictions start to ease it’s a real thrill to be part of a community event that brings people from the western suburbs together after such a long time apart,” said Nicole Bartholomeusz, Chief Executive, cohealth.

“But we mustn’t be complacent. Vaccination is just as important now as ever before, so this pop-up clinic was a chance for people to get their first, second or booster shots, including first doses for 5-11 year olds,” she said.

The Abbot of Quang Minh Temple, Senior Venerable Thich Phuoc Tan, OAM, who has been the temple abbot at Quang Minh for over 20 years, says that the day is expected to attract over 1,000 people.

“We look forward to welcoming everyone to the Temple, old or young, religious or atheist to enjoy the day’s activities, and to take the opportunity to get vaccinated at the same time,” said Ven Thich Phuoc Tan.

“Our community has shown their resilience through hard times, and the high vaccination rate shows how much they care about each other, and themselves,” he said.