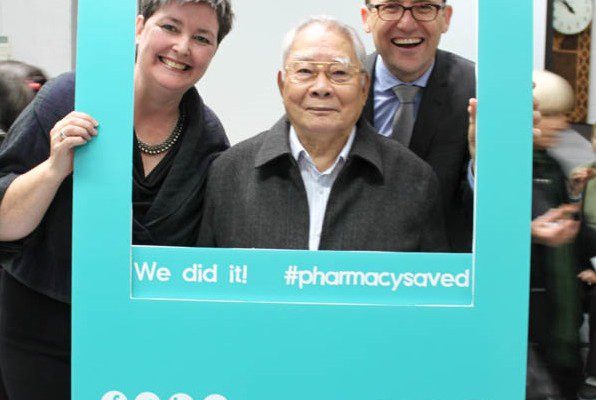 More than 100 community members, supporters, and local politicians gathered at cohealth Collingwood on Tuesday 18 May to celebrate a grassroots campaign victory to keep the community pharmacy from being closed down after it was axed in the 2015 Federal budget.

As a direct result of the campaign, in April 2016 Federal Minister for Health, Sussan Ley approved an application for the pharmacy to operate as a community pharmacy, and in doing so secured the future of the integrated pharmacy at cohealth at Collingwood.

The success of the 11 month campaign is a credit to the role played by cohealth clients and the local community who were concerned about the impact of the decision on their health needs.

The strength of feeling behind the imminent loss of the community pharmacy saw people reflective of this diverse community step out of their comfort zone and go online for the first time ever to let Federal Minister for Health, Sussan Ley know how important the service was to their health and wellbeing. The campaign also included several community meetings interpreted into many languages, the production of posters and letters, and was strongly supported by other organisations within the health sector.

Robyn Williams, local resident and long term client of cohealth said. “Continuation of the pharmacy at cohealth Collingwood means everything, not just to me and my family but to the community in Collingwood.

“This unique and comprehensive community health service can now continue to be relied on by so many people, who without it, would be struggling to have the quality of life they currently have”, Ms Williams said.

cohealth Chief Executive, Lyn Morgain said “This service is vital for the many individuals on low incomes and experiencing complex and ongoing health issues for access to affordable and appropriate medication and integrated care so they can remain living in their homes.

“The integrated pharmacy in operation at cohealth Collingwood is recognised as best practice and is proven to lead to better health outcomes for clients”, Ms Morgain said.