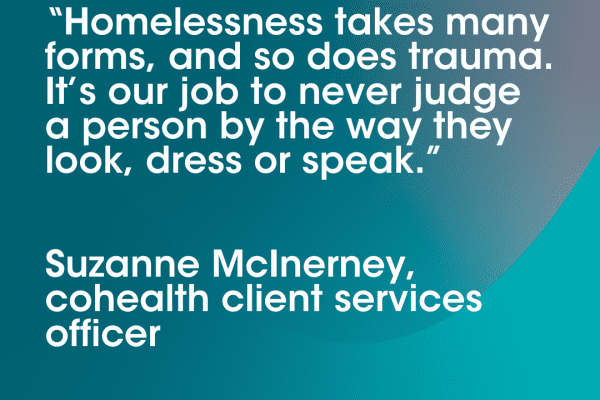 Although the Melbourne Town Hall vaccination centre has recently expanded to welcome all members of the community, a recent experience with a client who presented without a Medicare card reminds us how important it is to have safe, welcoming health spaces for people who are vulnerable.

Earlier this month cohealth Client Support Officer Suzanne McInerney was working at the Melbourne Town Hall vaccination centre, walking the line and talking with people who had questions or needed support to get vaccinated. Suzanne became aware of a woman standing alone outside the Town Hall, seeming unsure of her next steps.

As Suzanne and other CSOs have been trained to do, Suzanne initiated a conversation with the woman, asking if she wanted to get vaccinated.

“She was well-dressed and carrying a suitcase. When I asked how I could help her, she told me she didn’t know what she was doing. She said her mobile phone was broken and intimated that someone may have deliberately broken it,” said Suzanne.

The woman also disclosed that she didn’t have any ID or a Medicare card, and potentially someone had taken her documentation. She also told Suzanne she didn’t have any family support, and had been wandering around the city with a suitcase not sure what to do. It became clear that she had no accommodation.

Although the woman didn’t overtly disclose what lead her to be in the city, Suzanne was able to recognise the cues of trauma, and invited her inside to speak with a peer worker privately.

“She was very nervous and upset. I explained that cohealth could help her. It wasn’t the right time to be offering her a vaccination – she needed support for whatever she was going through.  She wanted someone to talk to, and we were able to give her that.”

The peer worker arranged an Uber to take her to cohealth’s Central City homelessness support service and the team there organised accommodation for that night, and meals.

“The important thing was that she was never left alone. From the moment that I started talking with her, to when she was taken to her accommodation she had a worker with her,” said Suzanne.

The cohealth homelessness and health support team have offered to connect the woman with specialist services to address the issues she is experiencing.

What struck Suzanne was that from all appearances this woman did not appear to be at-risk of homelessness.

“It hits home that we can’t presume to know people’s circumstances just by looking at them. Homelessness takes many forms, and so does trauma. It’s our job to never judge a person by the way they look, dress or speak,” said Suzanne.

People experiencing homelessness and other crisis often gravitate towards the CBD because of the concentration of services and supports available. Having accessible, safe and welcoming spaces where mental, physical and social health needs can be met is critical.

There can be a range of reasons people don’t have a Medicare card. They may be international students or asylum seekers who aren’t eligible for Medicare, they could be a person experiencing homelessness who has lost their documentation, or they may have had their documentation stolen or destroyed by a partner or family member as a form of control. Since the cohealth Melbourne Town Hall vaccination centre opened on 1 September, nearly 10,000 people have been vaccinated, of which 60 per cent did not have a Medicare card.

The vaccination centre has been a resounding success in bringing the vaccine to the community, but just as importantly has provided opportunistic engagement with vulnerable people who might otherwise miss out on support.