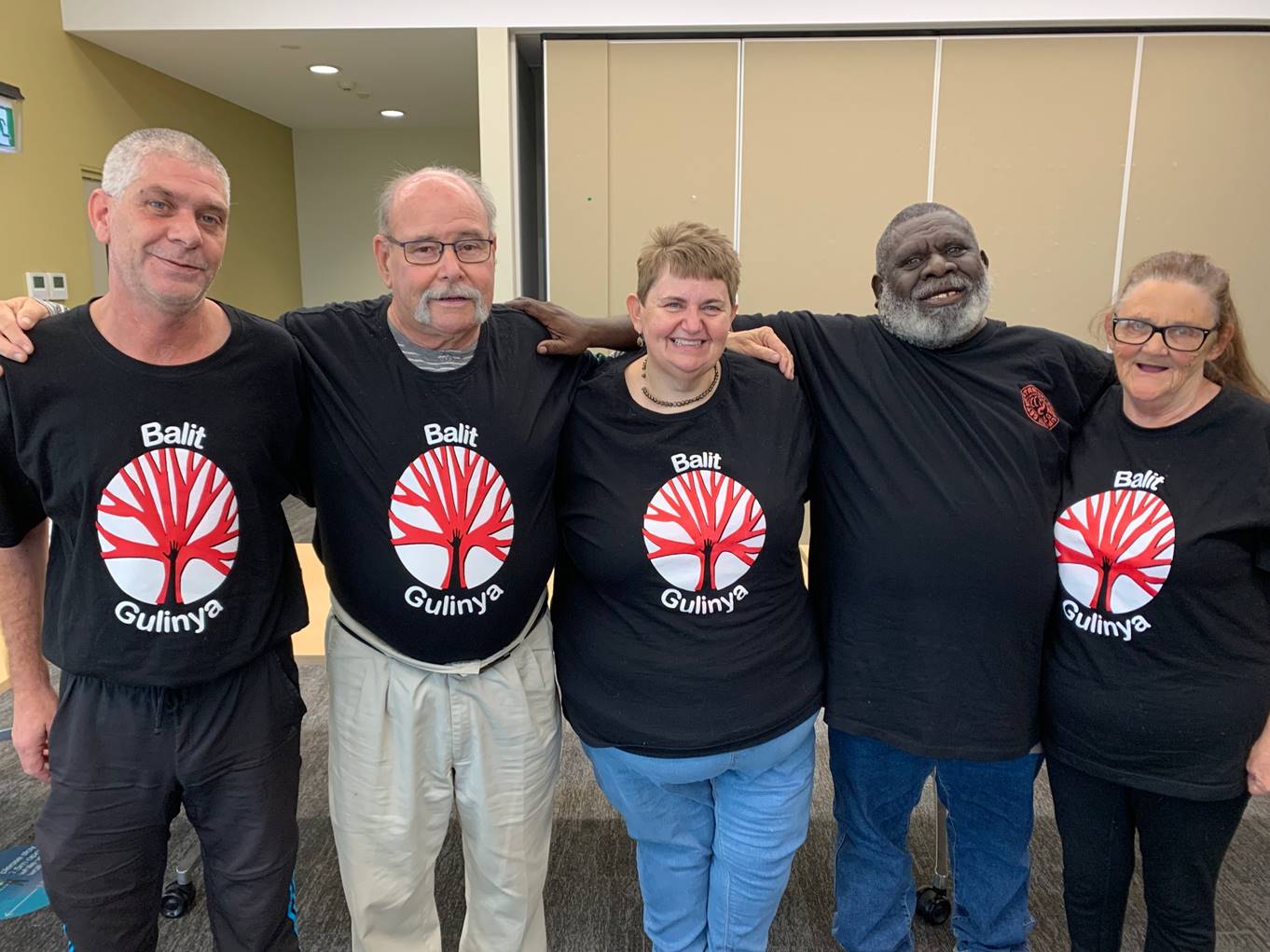 Among the people who will gather for a NAIDOC celebration at cohealth in Braybrook on Thursday are people from the cohealth’s Balit Gulinya group – some who have grown up immersed in their Aboriginal culture, and others who have discovered their heritage more recently.

For brothers, Barry and Phil Briggs, discovering their Aboriginal family connection later in life has led them on a special journey in which cohealth has played an important role.

As children growing up in Echuca, Barry and Phil recall their parents mentioning the family’s Aboriginal history, but it was never discussed in-depth, and the details went to the grave with their parents.

But years later when a relative did a deep dive into the family tree it was confirmed that they had a connection to the Arrernte people.

It wasn’t until they were both in their 70s, however, that they started to actively connect with their culture by joining cohealth’s Balit Gulinya group.

Balit Gulinya (which means Strong People) is a group of Aboriginal and Torres Strait Islander people living in Melbourne’s west who, with the support of cohealth, meet weekly in Laverton to share stories and food and participate in group activities.

“The first time I walked into cohealth in Laverton in 2018, the worker introduced me to another Aboriginal man and said, ‘you’ve both got something in common… you’re both Briggs’,” said Uncle Phil.

“I just looked him in the eyes and was speechless. Here was this man who somewhere up the line was my family.”

Until he became ill in 2021, Uncle Phil was one of the most devoted members of Balit Gulinya attending the weekly Foodshare activity in Braybrook, and meeting with the group in Laverton for painting, music and guest speakers.

To connect with culture, Uncle Phil began learning didgeridoo in 2020, even managing to master the circular breathing technique.

He credits cohealth with helping him get through the last 12 months, which he describes as one of the most horrific years of his life due to the death of his housemate and closest friend, spiralling financial worries and developing Chronic obstructive pulmonary disease (COPD) which has resulted in him being moved into an aged care facility in Altona.

“My mob at cohealth really helped me get through this time. And to stay connected with my community, even now that I’m here in the aged care home. I feel cocooned by them,” said Uncle Phil.

Uncle Phil this week helped organise a NAIDOC event at his nursing home at which he was the guest speaker.

“I told the residents about my Aboriginal heritage and the importance of our culture. I told them how much respect our people have for their elders. People were amazed and asked lots of questions. I’m happy to be able to educate people.”

Uncle Phil’s younger brother, Barry, began attending Balit Gulinya only 12 months ago after encouragement from Phil. Barry says he enjoys the weekly gatherings as a chance to connect with elders from the community.

“I love coming to this place because of the people. They’re happy to share what they know and their stories. I’ve made some good friends here and we look out for each other,” said Uncle Barry

“The great thing is we all just call each other Aunty and Uncle, which is good because sometimes I forget names!”

Uncle Barry says that he went to a Sorry Day event this year for the first time.

“There was a smoking ceremony which was special. I took my daughter and she loved it. I’m trying to get her to come with me as much as possible to things like that,” said Uncle Barry.

She has since joined cohealth’s Yakeen Tharn team, and says that she’s at the beginning of a very long journey of discovery and connection.

“During COVID everyone was disconnected. We’re trying to get community back together. Balit Gulinya and Foodshare is about mob support mob, community supporting community,” said Jamie.

Through Foodshare the Balit Gulinya group members can pick up free food boxes containing fresh fruit and vegetables and meat.

“Foodshare brings people in, keeps them connected, but also gives them food relief. People are struggling financially. More people are at risk of homelessness. So that little bit of Food relief can really help,” said Jamie.

“Balit Gulinya is owned and directed by the community. We do it together, it’s not done for them. When we prepare our monthly calendar, we ask them ‘what do you want to do?’

“The elders in the group set the rules. And if anyone is unhappy, they take their problem to the elders to talk it through,” said Jamie.

To celebrate NAIDOC Week, cohealth’s Balit Gulinya group will gather in Braybrook for a smoking ceremony, bushfood tasting and a BBQ lunch.