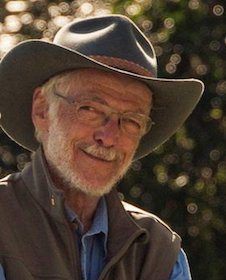 A man who thrived off unpredictability can be hard to describe. Filled with curiosity, the late Frank Fisher (1943-2012) may instead be better understood by exploring the way he viewed the world.

Frank was a passionate advocate for environmental sustainability and the health and wellbeing of vulnerable people. He was a long-time client of cohealth, and strong supporter of the community health model. In memory of his influence, we’re sharing anecdotes from his fascinating life to inspire you to live a little wilder, and to think like Frank, for the greater good.

“My interest is the wilderness within this room. If I can make you wilder when you leave than when you arrived – if I can make you less predictable – then I’ve done my job.” – Professor of Sustainability, Frank Fisher, to his students.

Frank’s son, Tim, says Frank was a deep and reflective thinker who delighted in encouraging people to think a bit differently.

“He just really wanted to inspire people to always be curious and to try not to take things for granted.”

“He really didn’t find it a chore to live that way. One thing he said sometimes was he wished he could show other people how much fun it was to live like he did.”

“He ranged from the most deep thoughts and reflections about what is going on in the world, what we are engaged in as humans, and how we got ourselves into this tangle, right down to what does that mean for me here in the room with you? It might mean I pass the tea pot, or I bring you things I know you will need, or I will help you when you’re sick, or I will meet you in places, whether it’s raining or not – all those day-to-day considerations. He was the most considerate, patient and forgiving person I think I’ve ever met.”

Frank didn’t have a ‘no junk mail’ sign on his letterbox, and the reason for that was twofold. One, he was genuinely interested in being exposed to what people were trying to sell. Two, he was aware that those no junk mail signs devalued the people who make an income from delivering junk mail and he didn’t want to alienate those people. “He was incredibly compassionate, he was just really remarkable,” Tim says.

MairiAnne recalls Frank’s passion to inspire others to change the way they think, rather than simply changing how they used resources. He would encourage people to experiment with changing something in their life for the environment and reflecting on their emotional reaction to the change.

It might be something small such as picking up rubbish in a public place and seeing how that makes you feel, and trying to figure out why that is a strange thing to do, and why it might feel awkward. Or trying to go without your car for two weeks, just to see what happens and to consider how immersed in that way of being you had become without being aware of it. Or trying not to eat meat eat for a month – considering your emotional reaction and reflecting on how and why it might be difficult for you.

“He wanted to help the people in cities recognise their role in helping the green part of the world by reflecting on their own thinking and their own needs,” MairiAnne says.

Frank was on the front page of the paper after convincing Melbourne City Council to trial a pay-by-weight rubbish collection scheme. This idea was spurred when he realised he was paying exactly the same council rates as people who are filling their rubbish bins to overflowing every week, even though he generated so little waste per week that it could fit in a one-litre milk carton. Instead of getting indignant, he suggested a system where people would consider what they put in the bin, by connecting council rates to the weight of rubbish. One of three teenage boys in the house, Tim remembers his father bought everything in bulk to cut down on packaging, reused packaging, wrapped their sandwiches in old bread bags, and reused the container every time they got takeaways.

“They’re small changes that people are finally catching on to, but were quite radical when he was doing it in the 90s,” Tim says.

Frank was a long-time client of cohealth and gave a lot of his time to the community. He was on the Board for the Collingwood Community Health Centre and loved everything about the idea of a community health centre.

“He thought it was so terrific that this thing existed for vulnerable people,” Tim says.

cohealth Nurse Helen Chakman knew Frank for about 30 years, and says everybody at the centre knew who Frank was.

“He was always polite and always so appreciative of the people who saw him at the centre.”

She says he had an unusual side to him and had a few odd ideas, but was always so passionate about everything he did.

When considering how cohealth’s work aligns with his values, Tim says it’s the strong community focus.

“He was totally committed and connected to the community,” Helen agrees.