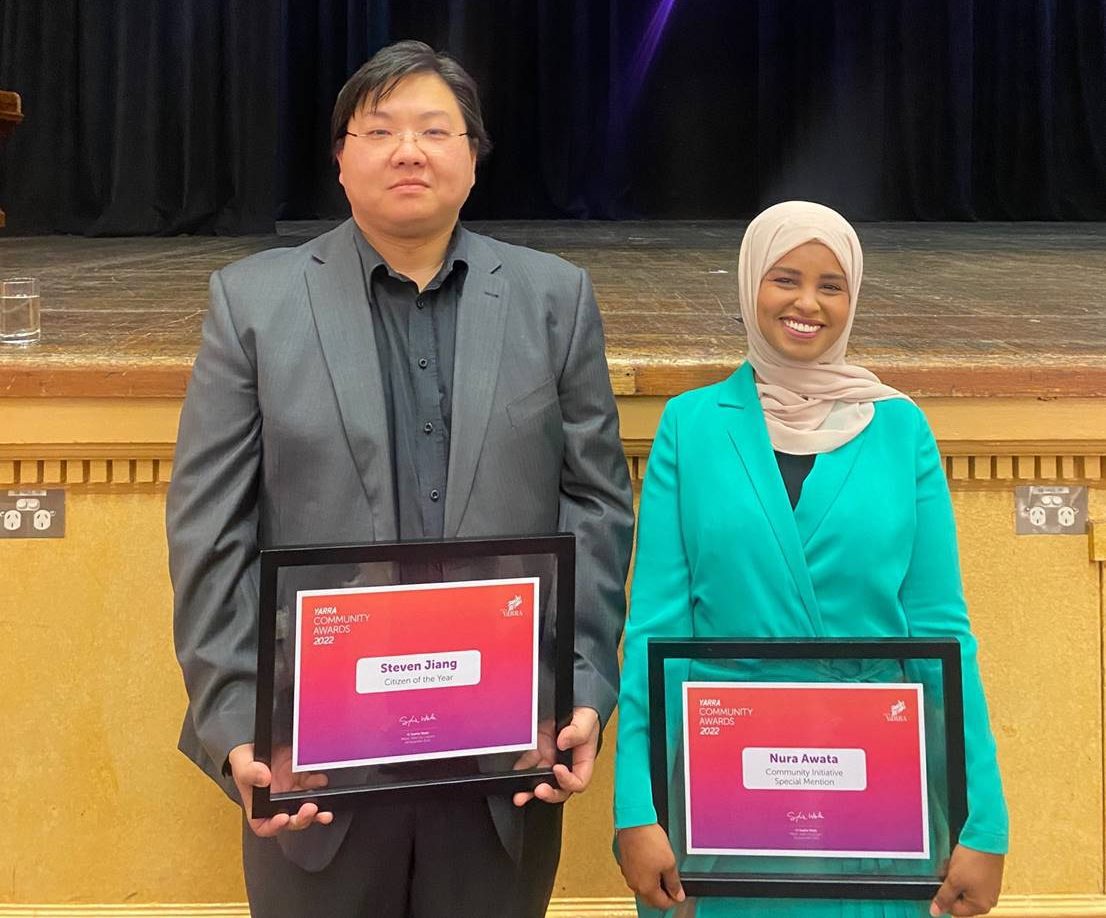 At the 2022 Yarra Community Awards ceremony on 16 November, two hardworking and humble cohealth team members were recognised for the substantial impact they’ve made in the community.  ​​​​​​​

Nura Awata and Steven Jiang are residents of the public housing towers and have been a valuable part of cohealth’s COVID Engagement Team since 2020. From the very first lockdown to this day, they have both gone above and beyond to support their fellow residents during extremely difficult times.

Steven was awarded ‘Citizen of the Year’ for his work, which includes breaking down barriers and supporting residents to access culturally safe support, as well as leading a program that has assisted hundreds of people access energy subsidies to reduce financial stress.

Nura received a ‘Community Initiative Special Mention’ for the significant role she played in the free op shop initiative, which saw hundreds of items of clothing, shoes, linen and toys distributed to people who might not otherwise be able to afford them.

Nura arrived from Sudan in 2019, and as a single mum, new to the country, she faced challenges finding employment.

During lockdown in 2020, she found out cohealth was looking to employ multilingual residents of the towers, who had connections with the community.

Nura is Eritrean and lives with her two children in the Fitzroy towers. Upon hearing about the opportunity, she instantly applied to join the cohealth team, and swiftly landed her first paid employment opportunity in Australia.

Nura has been thriving ever since, taking on a range of roles that are centred around supporting residents with their health and social support needs. Nura is extremely proud to represent cohealth and says she often receives positive feedback about the organisation’s impact.

“They praise us for not just providing medical services, but for caring for the social needs of the community,” Nura says.

One of Nura’s proudest achievements is the ‘free op shop’ initiative, which was started at the Collingwood high-rise towers in March 2021. Over 1000 free items were lovingly adopted by the community, but the true strength of the initiative was the meaningful relationships the cohealth team were able to build with the community who received the clothing.

Nura recalls many emotional moments at the op shop, including the time they helped a woman find a suit for a job interview. She got the job, and two months later, returned to the op shop and donated two brand new women’s suits to say thank you.

“It has been such an important initiative for our community,” Nura says. “The award is not just for me, but for my whole team – everyone has been so supportive, and they have all done such a great job.”

Despite winning the Citizen of the Year award, Steven prefers not to be considered a hero – he simply says it’s in his nature to help people.

“I love the feeling of helping someone out, to provide a breath of fresh air for someone and to take a weight off their shoulders. I try to help wherever I go – if I don’t help, who will?”

While Steven is a resident of the Fitzroy towers, he has worked across multiple teams and towers to ensure communities could access culturally safe support from someone who speaks Mandarin.

When RATs were highly inaccessible, Steven contacted local soup vans and kitchens and arranged regular delivery of RATs to ensure people on low or no income could still access them.

Steven also played a key role in the Maribyrnong Outreach program, which saw workers engage with residents to identify their health needs and barriers. In identifying dental care as one of the ‘hardest to reach’ services, the team established pop-up dental clinics, which 99 residents attended, and distributed 250 dental care packs.

On top of this, Steven leads an Energy Program, which helps hundreds of social housing residents access the Power Saving Bonus.

Steven has made a significant impact across a wide range of areas and continues to be a truly valuable asset to cohealth and our communities. Steven says he hopes the award can help him continue to be an advocate for cohealth.

“This is the community I grew up in, and they have needs. I need to ensure these needs are fulfilled, and cohealth enables me to do that.”